Dan and Paula Lumadue › About Us 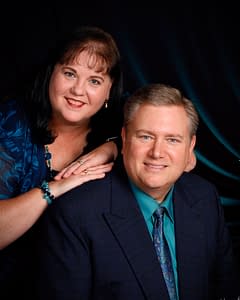 I (Dan) was born in Lakewood, Ohio and grew up in Avon Lake, Ohio. I committed my life to Christ when I was 5 years old.  At age 16 I was called into ministry while a part of Christian Heritage Assembly of God as Pastor John Bunney, a former missionary himself, shared about the call to serve the Lord. I attended North Central Bible College (now North Central University) in Minneapolis, MN and would then move just south of the Twin Cities to Owatonna, Minnesota to serve as an Associate Pastor over Youth and Worship. Then, in 1991, I became an AGWM missionary appointed to serve in Okinawa, Japan.

We served as AGWM missionaries from 1991-2002 in Okinawa, Japan. Having first served as the Associate Pastor of Neighborhood Church in Okinawa with Ed and Faith Ferguson, I would then step into the role of Lead Pastor, where we served until 2002. The ministry among the military and Japanese communities were the focus of our time in Japan, and many friendships have continued to this day, as well as new friends made along the way in subsequent ministry in the USA.

Paula was born in Meyersdale, Pennsylvania and was raised as a Missionary Kid from the time she went to Africa with her parents, Ed and Faith Ferguson, when she was 2 years old. They would later move to the Netherlands, where Paula and her family served as missionaries for eight years in Holland from elementary school through 10th grade. She would later enter the travel industry, but would then respond to the call of God as the opportunity arose to serve in Okinawa, Japan.

Though we had met at North Central University, it was here in Japan that we were married and our daughter Danielle and son Christian were born.  The Lord called us to return to the US, where we pastored a church in Columbiana, Ohio, during which Dan completed the Master of Arts in Ministerial Leadership at Southeastern University. We would then come to pastor in Cape Coral, Florida. Again, so many times of ministry together have created lasting memories and friendships.

Now, with the call to return to missions, we look forward to returning to this nation with a desire to see a great move of God in Japan! We are so thankful for the friends who stand with us in prayer and who support the ministry to which God has called us!

We have two children, Danielle and Christian.  Danielle is doing well as a student at one of our Assemblies of God colleges, and is pursuing a major in Psychology with a minor in Criminal Justice. She has had a call since 6th grade to become a lawyer specializing in international law in order to assist organizations that fight human trafficking. Christian is currently a Junior in High School and is called to serve our nation’s security interests in a particular way.  He is currently very involved in his High School’s JROTC program and is pursuing the ROTC program as he seeks to enter the US Air Force.

As our children are reaching the “Young Adult” stage, we are so thankful for the times we have shared together as a family. They will continue on with their lives as they follow God’s call to love Christ and serve Him in the way that He desires. We are proud of them, and we all know that while we may miss each other as our lives go to separate continents, there is nothing greater than knowing that your children are serving the Lord and accomplishing his purposes for their lives.  We appreciate your prayers for them, and are confident that “He who began a good work in us will be faithful to complete it to the very end!”  Change and transition are a part of life, but when God is in it there is the constant assurance of His presence, wisdom, guidance, grace, and unfailing love!  We are so proud of our kids, and we know God has great things in store as we love Him and are called according to His purposes!

Just For Fun - Our Family Back In Okinawa Days...